Tonight as I was driving home from Flagstaff with my 3 youngest, Kam asked me, "have you heard of the twin towers mom?". I told her I had. She said, "They were in America right?" I told her, "yea, new york city". She said, "yea, that's where, New York City. Then she proceeded to tell me about some bad guys, no, guys that made bad decisions that decided to kill the real drivers of the plane and make it crash into the twin towers and the place that's named after a shape, like a hexagon, "the pentagon?", "yea, the pentagon, and they had to take the president underground like the subway to make sure he would be safe. Then there was a lot of white smoke and the people that were at the bottom couldn't breath and some of them died. Hundred and hundreds of Americans died. Then we watched a video that was the real planes knocking them down. I had to put my head on my desk so I couldn't cry. Were you alive when that happened mom?" "yup, I was pregnant with Jaden, it was probably the most empty day of my life" "yea, it was really sad that that happened" 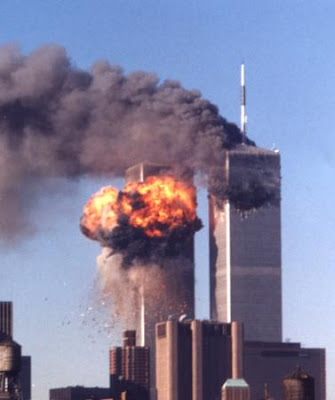 Wow, she sure had a lot to process. We told Boston today about it and then she asked if we could turn the music up! Someday. Have a great week. Congrats on all your happiness.

Thank Heavens for Joeseph city schools. Where real history is taught. You would never hear of a child now days learning that is school it only comes from home. Thank you for sharing that.

Awww. That was a sad, empty day. I found your blog through another blog. Hope you don't mind my footsteps into your life. :D Blessed be.

scooping it up said...

wow, just got all choked up. thanks for sharing that sweet conversation.