This summer has been a constant! And I think I have been running on overload the last week or so. It's been TONS of super fun stuff, with all of my favorite people (cept the Biddles and Jones...that'll be next week...yay). But I think I need to be sure to get at least 5 hours of sleep every night because you know when you feel like people destroy who you are with their words, when they only have negative to say about every aspect of who you are? Your kids, your husband, your personality, where you live, how you live, what you eat, what you believe. And though it's never meant to really hurt, after hearing it so much, (and of coarse not getting enough sleep) it really depresses you? And then to top it off, you think, "maybe I'll take the 3 older kids to the movies and lunch and target and kohl's by my self today"....and you end up holding two of them by the wrist at the check out so they dont' go run through the clothings racks and you lose them again? yea, that's me today. I'm there. Luckily the last 4 or 5 hours have reminded me why I want more kids, why I married Jase, why I live where I live, believe what I believe, and live the life I live. It's perfect. This is exactly what I've always dreamed of (cept with blinds and a yard...both will come this year). But this morning, I woke up and thought, oh my gosh, I am the one that everyone makes fun of....which really is proably true, but seriously, how happy am I with my 4 crazy kids, awesome patient husband, house in the weeds and dirt, 12 chickens and a dog? Ok, and there are the "feelings" part of this post...now on to the friends.
I LOVE MY FRIENDS!!!! We've had Bob n Mel out here for about 4 or 5 days and it was great. They were a bit bored, then a bit sick, so it wasn't their favorite trip I'm s ure, but I love having them over. They're awesome. Hopefully Mel got some pictures of us hanging out, cause I didn't. I'm lame. But she did do a few shoots with us, which I'll explain when we get th epics back. (not the most relaxing hour and a half of my life for the family pics, but I'm sure they're amazing). But we hit 2 firework shows...Hebers amazing extravaganza and Holbrook's small town hick works. Then we also had an awesome backyard show of our own thanks to new mexico firework stands. We played lots of Partini and ate lots of really really unhealthy food, which I'm trying to detox from right now, but it was FANTASTIC in the moment...ben n Jerry's 4 kinds, an amazing Paula Deen homemade mint cookies n creme ice cream, hot dogs, hamburgers, BBQ, chips, cookies, um, ok, just everything bad ever made. I loved it...cept its prolly what made them sick. Sorry Fullmers. Next time I'll make salad to go with the ben n jerry's.
On Sunday the John's came up to spend the 4th with all of us as well....always good conversation there. We've been John deprived lately, but good ridance to the blockage that was causing that. haha...you know what I'm talkin about Amy J. But I finally got to do another shoot with them. I LOVE doing shoots for them, they're a stylin bunch. 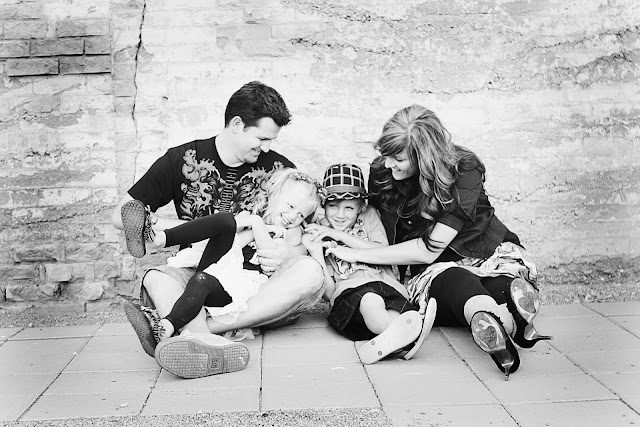 And of coarse Kam is going to wait for Austin when he goes on his mission and this picture will be in their slide show at the reception..... 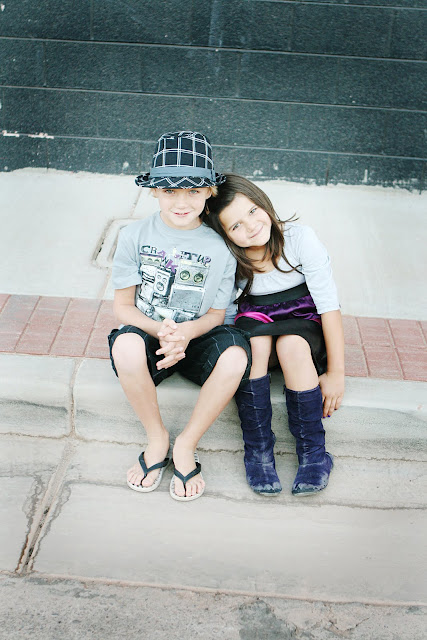 And my boy. he kinda gets shoved way out of the lime light thanks to his sassy sister, rambunctious 4 year old brother and of coarse the baby steals all attention, but this dude is awesome! he FINALLY got his dream haircut. It's not done the way he likes it in this picture, but he was soo happy that Jesse cut it exactly how he's always wanted it. He's awesome! He's a good helper, has so many quiet sweet moments and he loves his mama...that's my favorite! 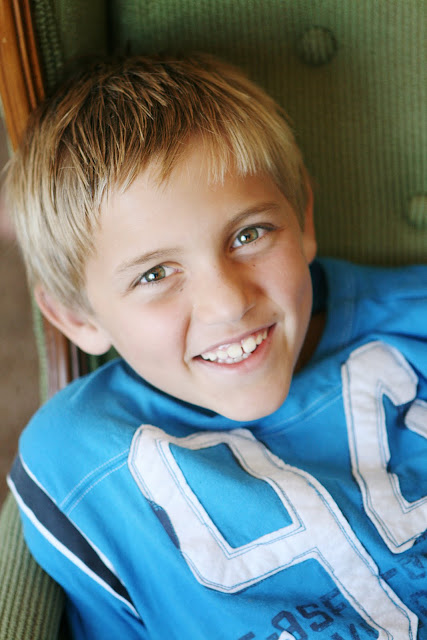 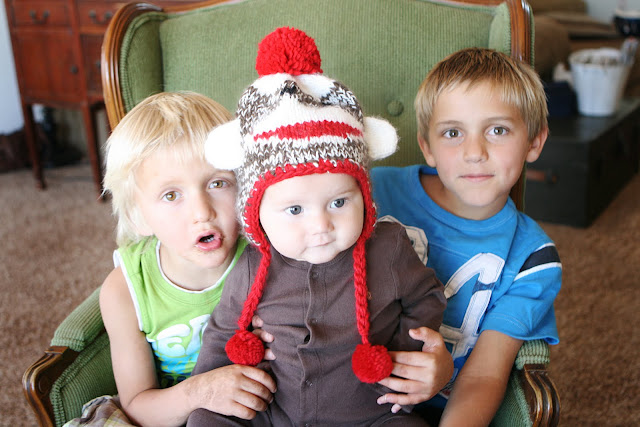 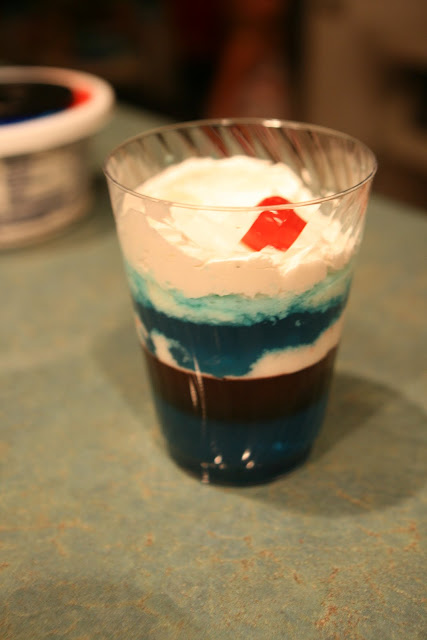 On friday we got to go stay the night at the Brimhall cabin in Greer with Brett and holly and their family. So nice. It was nice to be away from home and not be more craziness. The kids all played really well together, and it was fun to sit around and chit chat and eat snickerdoodles with Holly and Mel. We went to Eager Saturday morning for the parade. I'm really hoping Melissa got better pics than I did. I only took 4 or 5 and they weren't that exciting. This one of Grant and Boss divving up candy is a favorite though.... 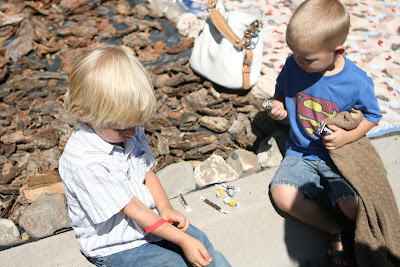 and everyone afterwards with their loot. 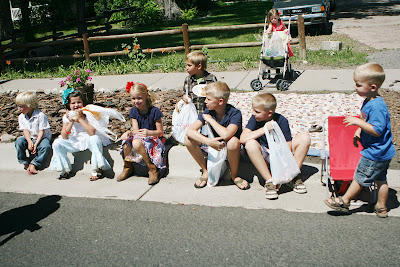 Then we went to the creek to have a picnic and the boys all jumped in with their nets and Jado was the first to catch a fish, which is soo good for him right now. He doesn't have many good friends to hang out with this summer, so he's been kinda down, but he had such a great time up there, and catching the fish made it all the better.... 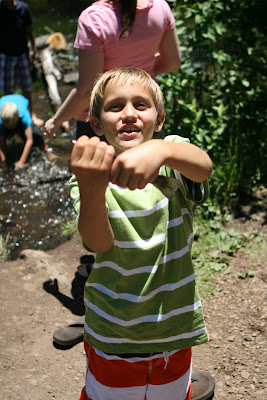 And of coarse, Bossmandoo was eatting....a lot....of watermelon. That pretty much sums up his summer so far. 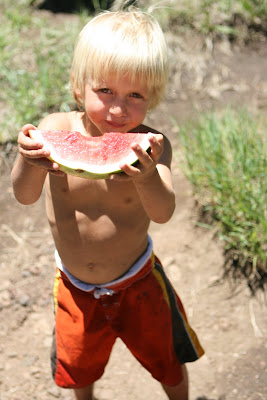 And the boys, hunting for more fish to catch. I think they caught something like 12 all together, but they caught and released all of em. 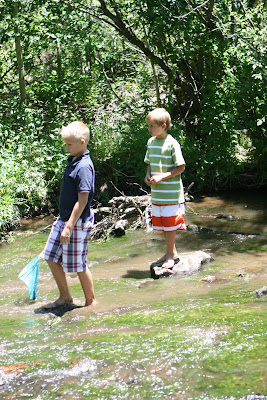 Bob n sweet Clara. I think the country life was a bit much for Clara...but by the end of the trip she loved Foxxie, I even caught her sitting by her and petting her...so she'll be all ready to come back next year. 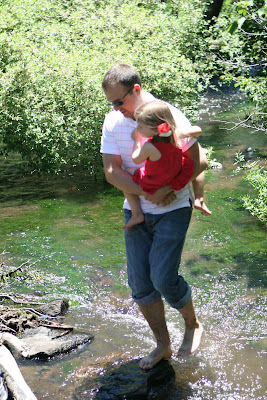 St. Pearcen de Paul LOVED the cold creek water. Acutually, he might have not liked it, but he doesn't stop smiling. 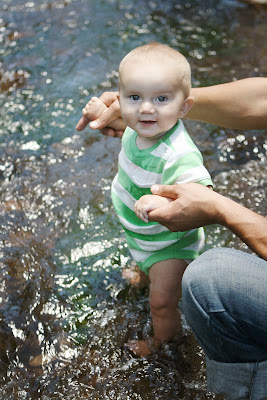 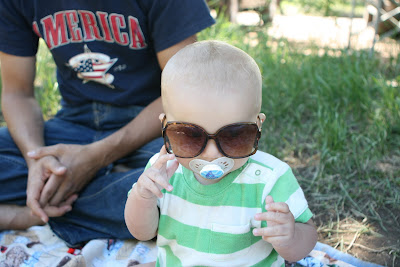 That night we headed up to Heber for the traditional BBQ and killer firework show. I dressed the kids up a bit, but didn't put a lot of effort into their hair or taking a good picture, so here it is.... 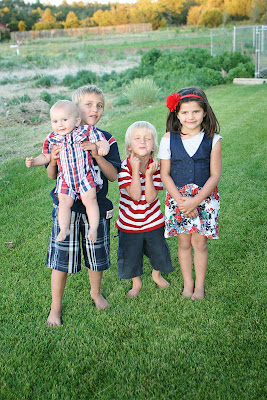 And of coarse the kids wore themselves out on the playset and trampoline, like they do every year. This year they used dad as a ladder too. 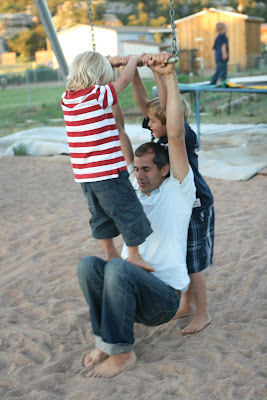 So far, July has been fantastic. It's a jam packed month, so I hope it keeps going great!
Posted by Kristal at 4:26 PM

Im so glad that you had such a great weekend! The kids look so happy and the pictures are awesome. Love the fish that Jaden caught. Glad you're having a jam packed summer that the kids will never forget.

I want to go to Greer so bad! I have always heard about how wonderful it is and I have never been there. We should do a weekend trip there. Looks like you guys had a fun 4th! We loved the JC celebration. We have always gone out to Woodruff, but they have been LAME the last couple years. We got in some sand volleyball and horseshoes this year. Lots of fun!

I had no idea you had such strong feelings about "the blockage" as you called her! HAHA! She can't see this can she? Awkward. It was fun, EXACTLY what I needed. And I hope that I am not the person you were reffering to about how you live your life.... I love the way you live and love your life. You know that right? Its perfect for you guys. I am happy you are happy with your house, kids, husband, beliefs, weeds and chickens. SERIOUSLY. SO if I EVER make you feel like that is NOT ok slap the freaking crap out of me and just know that I DO NOT feel that way. OK?

Well, we never get to see eachother anymore but I LOVE the Mulders!!!!!!!

I love your family!