Not much has been going on lately. The UPS man dropped off 3 big ole packages....the entry way unit I forgot I ordered in November. And the whole time he was here Boston was trying to grab his hand and bring him in to show him the baby. He LOVES to show everyone the baby. Even grandma and grandpa. The second we step foot in their house he takes the baby from me and takes him to grandma and says, "my baby". Anyway, back to the entryway unit....yes, it's new, and yes we'll be painting it this weekend. haha, I have a problem. Yea, we're painting a few things this weekend...the other half of the garage, my big huge amoire that Jase got me for graduation, a shelf, the entryway unit and I'll probably find a couple of other things before tomarrow.
Now on to my awesome little helper Kamryn. I'll start with the good of Kam and move to the naughtiest stunt the older 3 have pulled yet.
Kam is amazing. She's feeding Pearcen his bottle as I type. She loves to change his diapers, feed him, help me cook, and she's even catching herself cuddling with me sometimes when we're watching tv. She's awesome. She's still LOVING kindergarten and her latest friend is our new nextdoor neighbor Rowdy. She calls him Rowd. THey are together almost everyday...well, until yesterday, when they pulled the biggest stunt ever..... 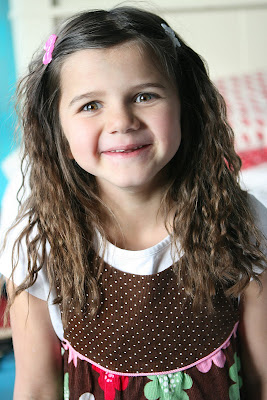 Jase and I went to the movies the other night and when we got back we found 2 empty soda cans from the 3 twelve packs we bought for new years. We talked to the kids about it and moved on. Then about an hour later, Jase went out to the garage and noticed all 3 boxes were empty (there were about 8 or 9 left in each box before we left). We questioned the kids and by quetioned the kids, I mean Jase came in, threw the boxes down and yelled, "what the heck?!". Um, yea, they fessed up and didn't go to school yesterday because they were too busy working to earn $10 each to pay for them. Um, but seriously 8 sodas in one night??? Shouldn't that make you sick or crazy or something??? Yea, they were fine. They fell asleep after us, but that's not too unusual anymore. Yea, so, good one kids...let's see you try it again. When I wrote Jaden's note of why he was 5 hours late for school he said, "please don't write that I snook soda". haha, I love that he says snook. 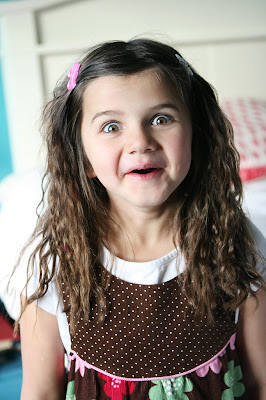 Now to my one non-snooker. LOVE HIM! Seriously he's soo smiley and squishy and round and yummy. I remember with the older 3 getting excited with each milestone, but when we put pearcen on his belly and he kept his head up like this, I kinda got mad....I don't want him to grow up!!!! He's soo sweet right now! 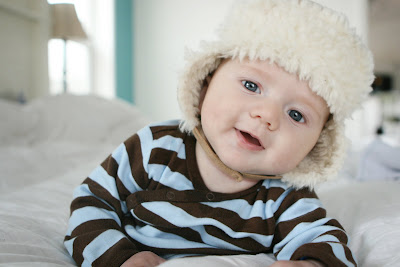 Mmmm, I wish I could blow this up...he's soo freaking cute! 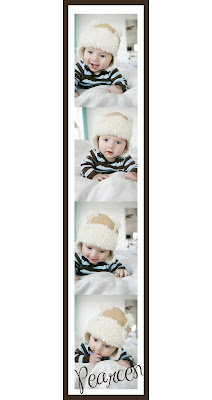 haha, thats hilarious about the soda, what rebels!
and little pearcie is sooo precious!

I want to eat up Pearce! I LOVE the pictures. How did you take these. That hat....I GReat!

I love you little snookers too.

Um, I put him on my bed on his tummy and took them. What do you mean? Hey, I thought you were sending me pictures to edit! send em!!!!