What makes you happy???

We have a book called taking a bath with the dog.  ANd it's been one of my kid's favorites for years and years.  Kamryn memorized it and would "read" it to us before she could read.
This last week was stake conference...and we were only 10 minutes early instead of an hour early so we were way way way in the back and our stake doesn't do the screens to see the speaker, so we could see him/her, so it was harder than usual to keep the kids interested and we only brought so many books.  So we decided to draw mustaches on each other with permanent marker and make a list of things that make us happy that we were going to do when we got home.  here's the list:
picnic
eat cookie dough
ratuki
walk
dress-up
put new curtains up
slurp spagetti
tickle baby brother
stay up late
make a wish
sing
eat ice cream
So we got home, got changed and had a picnic.  Then we all put our aprons on and made cookie dough while Jase made the Sunday batches of bread.  These obviously weren't planned pictures since none of us are looking at the same time...and my face in the last one is cookie dough coma face. 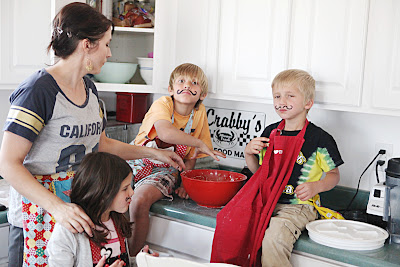 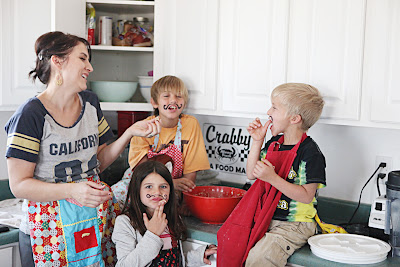 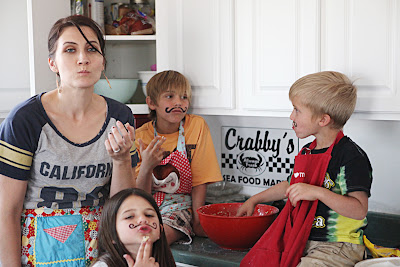 Then we turned on Jaden and Kamryn's favorite songs of the moment, "fireflies" by Owl City and I just can't wait to be king from lion king (both on my play list if you wanna hear em too) and we SANG and danced and SANG!
Then we decided it was time to play dress up.  I dressed up in an awesome dress that Linda Miller let me barrow...super heavy with beads and so amazing.  Jase was an ape, Kam was a chinese older girl (that's what she called it) Boston wanted to be a ghost and Jaden was kung fu gorilla boy. 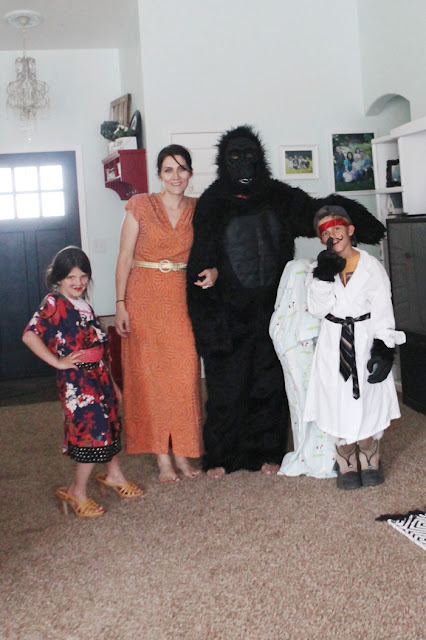 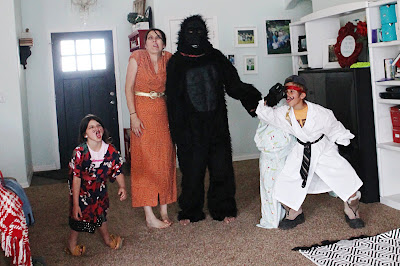 Then we changed, tickled baby brother...that really does make us all happy. He's hilarious and loves to be tickled.  Then we put up the awesome new curtains, had the Lampsas come help us move the new computer desk (again from Linda Miller's yard sale) and new TV around.  Now we feel like we're in a new home again (that's what makes me happy, I LOVE changing things around...I'm painting all day today.  Then we got on our PJ's and played a few games of Ratuki, stayed up late then went to bed.  It was probably my favorite  Sunday in over a year.  We do still have to go on a walk, slurp  , make a wish and eat ice cream, but I bet we do all of that today!
Yesterday stated out awesome too..I decided to make a fruit tray ofr the kids to go with their french toast, and as I was cutting the watermelon then lifting it to put on the plate, it fell out in the shape of hearts!  No lie!  It was just that kind of day.... 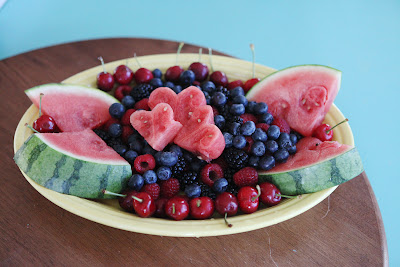 Today hasn't been to shabby either...well, other than I threw my back out running around doing jobs around the house during the turbo fire 45 second break, then running back in and jumping right into a lunge, then bam!  Had to drive myself down to Jase's and get put back into place. ha.
But this kid has been awesome....just eating lunch, being happy in his high chair for a good hour! 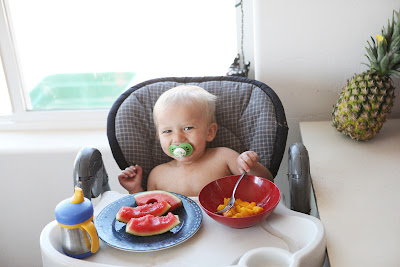 And now we're going to go check the mail and deliver these cute cookie packages that we made this morning. I wish I would have gotten a better picture of the tag...it says "homemade and to die for".   Then we're making raspberry jam for the first time ever...I'm sure I'll document that later, having an FHE on modesty by Kamryn, and slurping spaghetti! 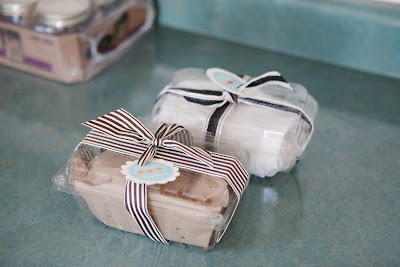 I love the mustaches! You guys are all so cute!

wow, can i come live with you?

UGH!! You are soooo cool! I need to be more like you!

I agree with Alison. This post made me really happy! I'm glad you've had such a great few days!