So, I really didn't even put much thought into J's kindergarten graduation cause I didn't think it was that big of a deal. I did want to get him balloons, and a few one dollar bills to congratulate him, but as far as the actual promotion being a big deal, I didn't think it would be. Um, I shed a tear! How lame?!
Anyway, here's a pic of him and I in windy windy windy JC right before the graduation. He's a cool looking dude huh? Defiantely cutest in his class. 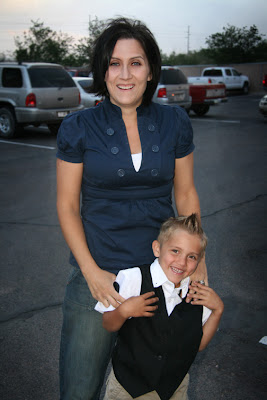 Ok, and they shoved him in the back row!!! do you see him?? Sad. Oh, and not to mention putting a TALL girl with huge pigtails right in front of him. This was our view the whole time. 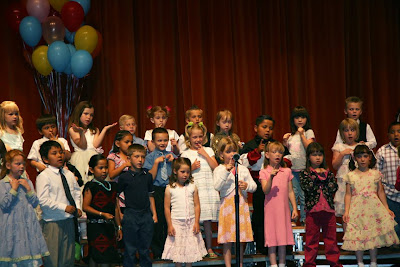 Ahhh, and his part! Seriously he did amazing He said it nice and clear with his cute little voice. Hopefully Jase can figure out how to get it on the computer so I can share. Here's what his part was:
In APril we learned about Dinosaurs from the Raptor to the Rex
Some were gigantic and fearsome, they might have been easy to vex. 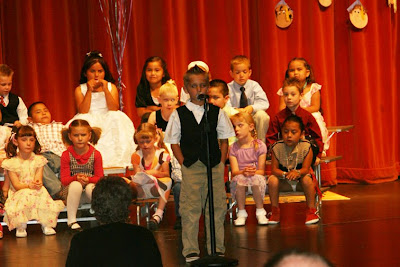 And I told him to look cute for a pic in the hallway of the auditorium. This is what he came up with. 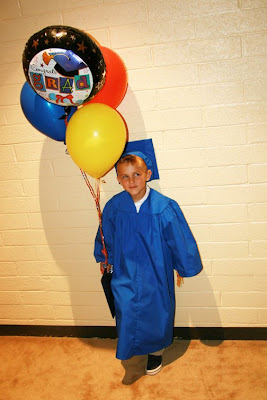 And Grandma took a nice pic of the family. Yes, J is the little one peering over my,...blah! 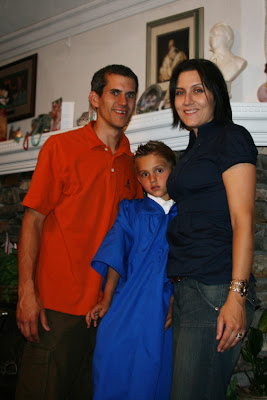 Congratulations J! You're awesome! And even though Hutchins threatened to not pass you because of your excessive tardies/abcences, I knew you'd pull through!!! Oh, and needless to say, Jaden didn't get any of the 4 "attendance" awards. We gave him the cool award, much more important...ask Grandpa Hatch.

Hey, I think I got that cool award 38 years ago, yea, that must be passing through the family - COOL.

Best looking graduate on the planet! (You look faboo too)

Attendance is lame! So is Hutchins.

He looks like a little model in his vest and collared shirt! What a cutie. Your lookin skinny Kris!

You both look great!

He is so dang cute and WoW you look great!!!!! Oh and sorry it took SO long but everything is in the Mail for you! I swear my head is competely gone lately! Love you

you look great!! and your son is adorable.. got to love the kindergarten graduations!!

Yay for Jaden and Kam! And don't worry, I cried at Kingston's preschool graduation, too....SO FREAKING CUTE in their little cap and gowns!

Okay, so J is such a qt, as well as your other babies, all so beautiful. But I want to tell you that you look flippin' awesome. So you say I have to call you a big fat lard butt, in order to motivate you to lose the 8 pounds so you can color your hair, but the truth is, you've worked hard to look so darn awesome and you are so close, so kick it into gear, get it done, and don't expect me to lie to you about looking chub, because girl you look hubba hub. Your almost there, just dig down deep, drink more water than you've ever imagined (make yourself sick with water), push yourself harder than before when working out, and just remind yourself how close you are. You can do it.

Heck yeah I am going to the hottest shoot ever of the two of you! I am so excited! You look amazing! Is Jason in heaven or what? I feel sorry for him, cause 15lbs is probably really hard to gain! I can plan my first road trip away from my family and take my soon to be sister in law with me who I am kinda teaching photography to. She is the hot blonde on my site. So sweet and fun, you would love her. Or..... maybe you can come here? You guys can come here you know! We are skipping out on the St. Johns reunion cause they never really planned it and we are going to our friends cabin in Utah that week. Lets plan us getting together though. While we are at it, we should just go ahead and get both our annual family pics done by each other again.

btw, with all the amazing photographer friends you have, why the heck do you want me to do them?

DUDE! where did you get that blue shirt!! your so stinkin skinny!!!1

You look amazing Kristal!! I think it is awesome how hard you have worked to look as great as you do. Thumbs Up!!

I have to agree with everyone else that you look FANTASTIC and I'm in LOVE with your shirt as well. Way to go! Congrats to cute little J as well!