Thank you all for your great concern, but seriously, not a big deal...and I warned you all, not a big deal. But kind of, to me, it was. And to top it off, there was an unexpected kicker to ruin the day at the end. 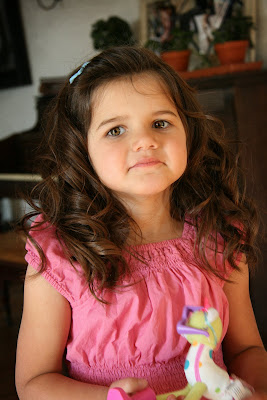 I've been begging K to let us cut her hair for over a year because she's super tenderheaded and there is really loud screaming from the Mulder home every morning, but she wanted to keep it long...then 2 weeks ago when I chopped mine, she's been begging me to cut hers like it. EVERYDAY! And I don't want to now. I've secretely had this dream to send her to her first day of kindergarten with hair to her butt in 2 half ponytails like mine was for my first day. 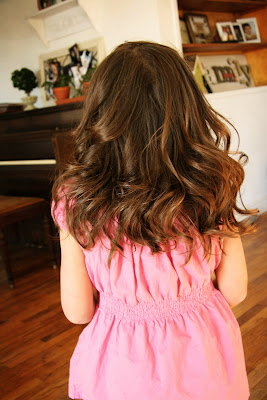 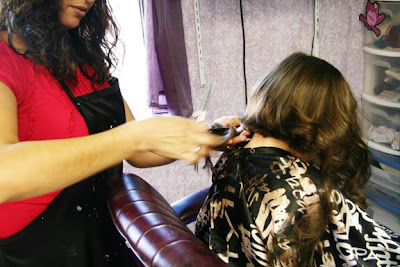 I was seriously soo sad the whole time. It was awful. It was WAY worse than when I chopped mine. she said she wanted the exact cut as mine, but I told the lady chin length, and no stack. 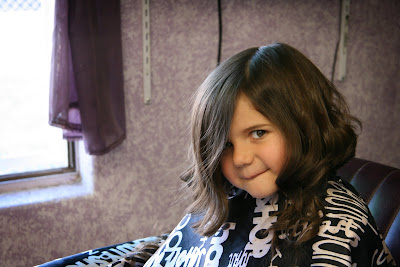 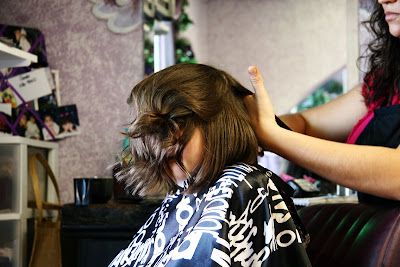 And I haven't taken any good pictures of her yet (today I will) but this is the final product? Should we go shorter? Stack it? The lady said we could come back anytime within a week and she'd change it. bah! Isn't it the saddest?! I LOVED K's hair! 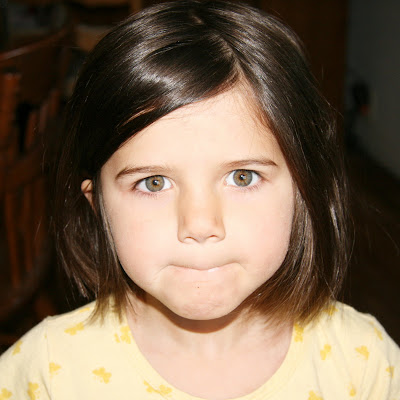 And here's the kicker. She has had a favorite chick since the day we got them...it's the only one that was all yellow. She would hold it first thing in the morning, and first thing when daddy got home to get it out for her, and she named it Ariel. She said it was the only girl one, even though we can't tell. Well, we had a bunch of friends over for a BBQ last night and her and her friend were holding them, and one of the other kids ran into us and said, the chick is dead! And K walked out and petting Ariel, but Ariel's head was flopped completely back. Jase checked her and she was still breathing, but completely motionless. Kam didn't think she was dead. And so we let her hold her, thinking she'd put her down or something, but it was time to eat, and Jase had to pry Ariel out of K's hands, and K was screaming and crying, and didn't believe it was dead. And she stayed in her room for about an hour rather than eatting or being with her best friend, which are her two favorite things. I sat in with her and talked to her about how happy Ariel is now, and how we'll get to see her again. It was the saddest parenting moment I've had. She is our HUGE animal lover. Our other two love animals as much as any other kid, but K perfers animals to anything. She gets it from her dad and her grandma Mulder. And I LOVE it about her, but this part of it is sad. 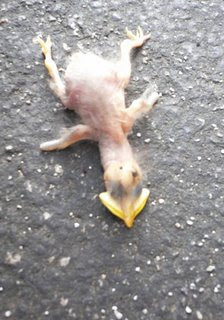 Not the real Ariel. Ariel was much prettier, same ammount of dead.

On the flip side, I think her hair looks fabulous. I understand how sad you are, though. I'll feel devastated when Emma decides to cut her hair off, too!!

I loved her long hair but I love her new cut. It is so cute on her little innocent face. She really is beautiful and can wear any cut perfectly!

That is so tragic! Poor Kam. She really does look adorable with short hair. And she wanted to be just like her mommy so thats a little flattering right?

Poor Kam! SOrry about the chick BUT yes her hair is way cute short.

Her hair looks darling! I love it! I think a slight stack would be so cute too, especially because she has such thick hair!

Soooo sorry about the chick! SAD!

That is so sad!!! You say the funnest things! "same amount of dead" nearly made me pee my pants. Kam is just the most adorable girl ever and I Love her hair long but i LOVE it short!!! She's so cute she could do whatever she wants with it and still be the cutest thing ever!

Sorry about Ariel. Kam's hair looks so adorable. She is such a pretty little girl, her hair looks great either way. Just remember you are her idol and she looks up to you for everything. It is fun being a mom!

Oh she looks so cute, but you know I'm such a sucker for short hair on girls - hey, look at Nan! A little stack in back is fun! That's how Savannah's is. So sorry about Miss Ariel - hard times!

I think her hair is adorable! She looks great! I'm glad everything is ok. I tried calling yesterday, but you weren't home. Sorry about the chick. Hopefully Kam is feeling better too.

I love Kam's haircut even though I loved her long hair as well. Sad story about Ariel! Sorry you guys had to go through that, poor Kam!

OH MY GOOdNESS! that is so sad! aw but Kam Looks ADORABLE! and poor chick!

ps when is the next time ytour coming down here? i want you to come to one of my meets for track. look at my blog so see the dates. i really want you to go!

k- remember me telling you about the Pink chick I got for Easter and it died too and I didn't think it was dead so I carried it around too? Remember? Ya, I think was the same age as K. So sad. She'll get over it. I did.

I think her hair is perfect! And it will always grow back again.

and i thought my dead baby bird story was bad...that's so sad!..and i think kam's hair is beautiful both ways!