I'm soo glad it's fall. Wish I had the motivation to get my fall decorations up, but I'm trying to organize things so that our move next month won't be horrible, so I don't see the point in getting more stuff out to pack back up. I stink, I know, but I'm LOVING the leaves all over our house and the smells (scentsy cinnamony smells) and the great wheather for walks. Love it all. I did however get out some old frames that we had in Jase's old office so that I could put some of Pearcen's new pictures up. Aren't they cute? 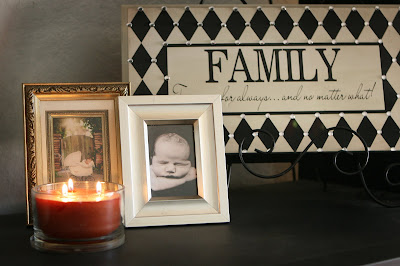 His HUGE pictures are still being framed. Hopefully we'll have them next week. Last week at school was red ribbon week and the last day was "hero" day. Jase and I were happy when the kids picked us...after going through a long line of super heros of coarse. They were supposed to dress like real life heros. Jaden is lecturing on taking vitamins...I'm exhuasted...aren't they good? 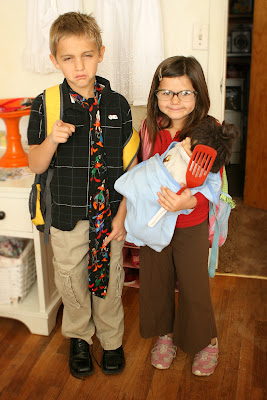 And of coarse, halloween. I didn't get any pictures of the actual halloween because I was a lousy mom this halloween. But here are the pictures from trunk or treat. It's Dash and the 3 little pigs. The big bad wolf..um, we lost the nose for it, so there wasn't one. 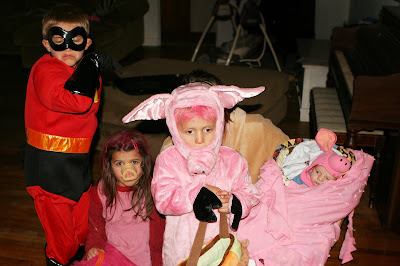 On Halloween night, Jaden was Dash, Kam was a kitty, Boston was a Frog and Pearce was a bear. And all week long they've been numerous other things.
Posted by Kristal at 2:00 PM

Where are you moving??? Did I miss the whole house building thing or are you renting again or what??

I LOVE that pic of them being you guys! Jaden's look is dead on. haha

Oh I love that they dressed up as you guys for their heroes!

Oh....and "Jaden's lecturing on vitamins" that made me laugh!

Didnt you worry about the H1N1 with all those piggys. Wish you had the picture of moms 3 pigs about 38 years ago, its a family thing. Where are the pictures of baby and mommy?

Love all the "dress up" pictures!